The next day we boarded our train in the early afternoon and were headed off to our last stop Rome!

After an uneventful journey we finally arrived in Roma Termini.  Once off the train we had heard about a wonderful market inside the train station and after a little searching finally found it. 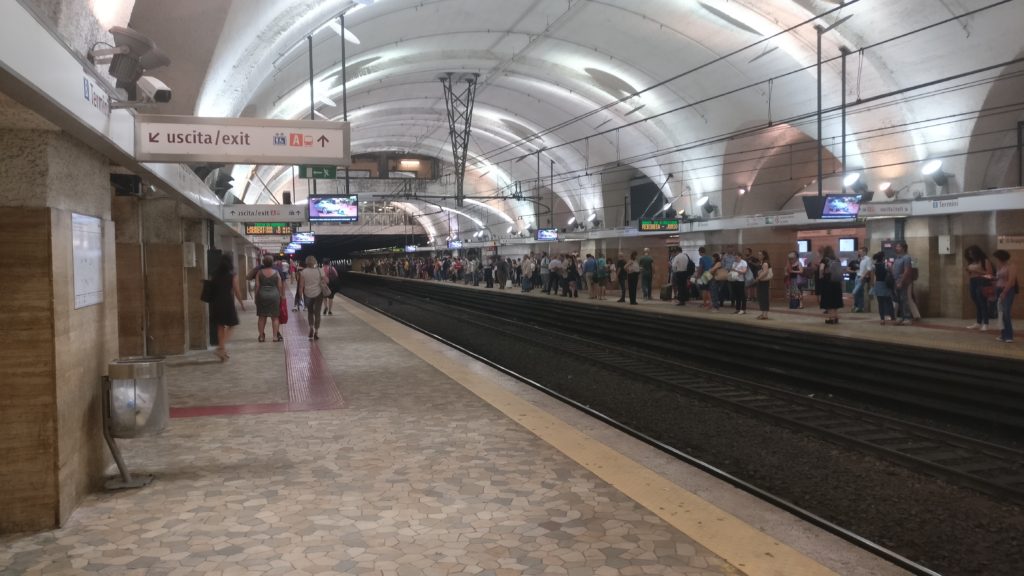 The metro underneath Termini station

During some previous research we had discovered Bonci pizza and decided to give it a try.  We each had a few slices and then headed to our next Airbnb.  Our Airbnb was located near a metro station so within an hour we were in and acquainted with the new unit.  Like the last, this one also had A/C as well as laundry which was great for us.  We decided to sit down for a few mins and watch the World Cup finals.  It was unfortunate for Croatia, but France did play better.  For the rest of the night we started to explore the area around our unit getting our first glimpse of the Tiber as well as a lovely market along the shoreline with various popup bars and music.  Finally we finished the night with a late visit to Eataly which we had missed in NYC and I thought it would be great to see and experience the food there.

We had decided that the following day we would try and see the Pantheon, Trivvi Fountain, and maybe get to the Colliseum as well.  We got up in the morning, showered, and headed out into the busyness that is Rome.  Our first stop was a spot known only as “the pyramid”.  It was built for Gaius Cestius around the year 12BC.  This is the kind of stuff you see everywhere in Rome, ancient stuff! 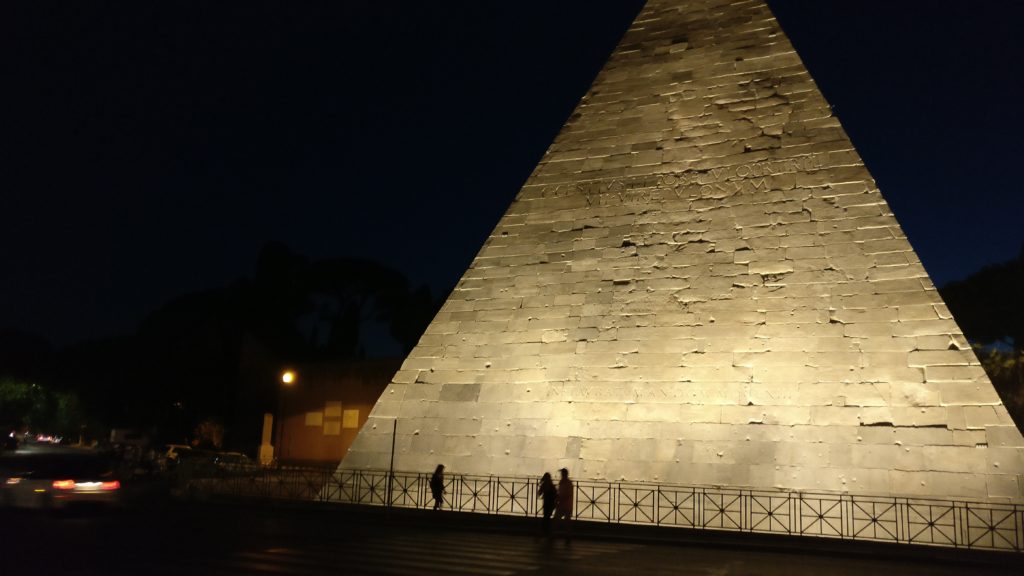 The Pyramid at night

After this we made our way into the the main part of the city and visited some Piazza’s that had amazing fountains.  Eventually we made it over to one of my favourite buildings in Rome, the Pantheon.  This is a Roman temple built around the year 120A.D. and is one of the best preserved buildings in all of Rome. 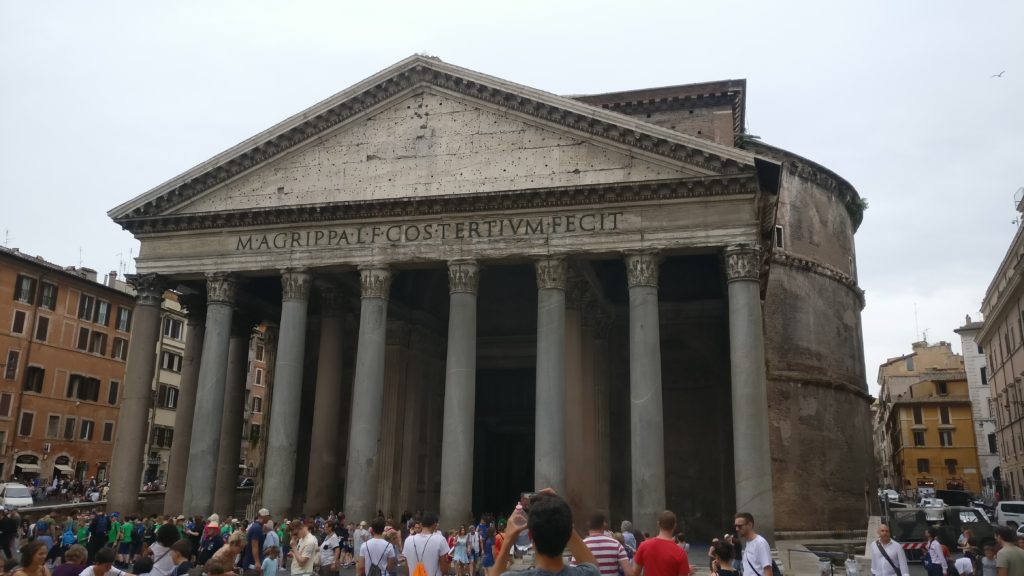 The ceiling is one of the most striking features of the entire structure.  It has a poured concrete dome shaped roof with a centre hole for the sunlight to come inside.  The ceiling looks like it was built yesterday and is in an almost unbelievable condition. 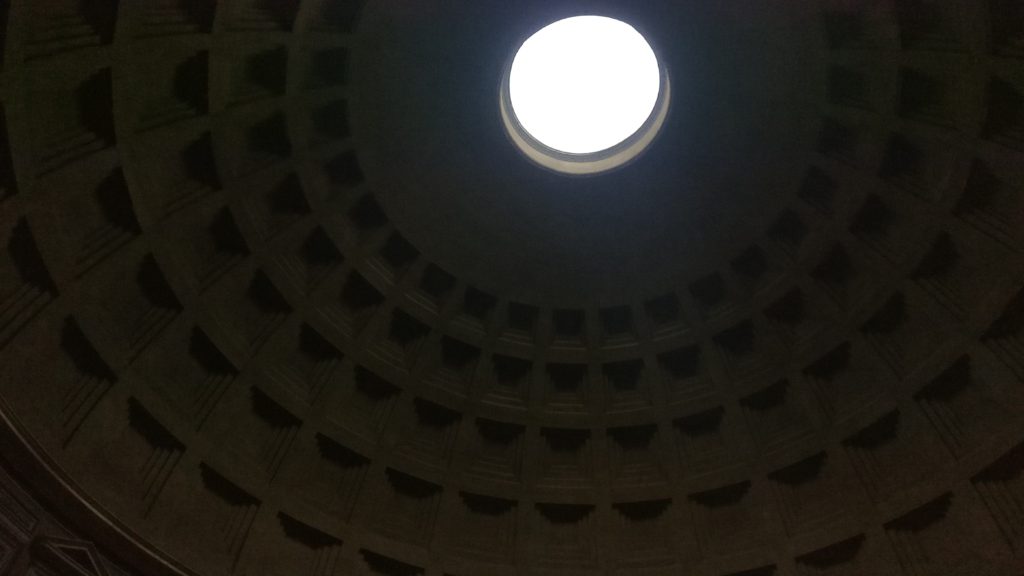 Another nice aspect is that the Pantheon is free to enter and had minimal queues when we went.  After a stop for an Aperol spritz we moved on to another section of the city.  We walked through some of the touristy areas and eventually came across the Spanish steps.  The name Spanish Steps comes from the fact that the Spanish embassy used to be located at the top of the steps.  There are still several embassies in this area including the French embassy.  We climbed up the steps and admired the view from the top.  It had great views of Rome where you can see St. Peter’s basilica as well as the Altar of the Fatherland which can be seen from almost anywhere in a Rome. 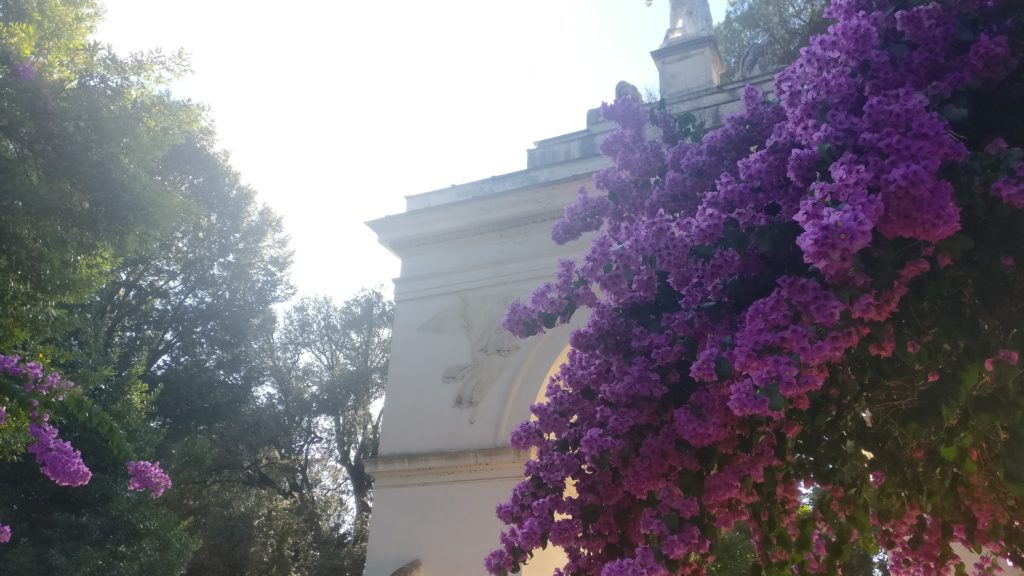 We also ventured into Villa Borghese, a massive park located in central Rome.  Like everywhere in Rome, this park had loads of sculptures and fountains in a large treed green space.  A nice place to hang out for a few mins! 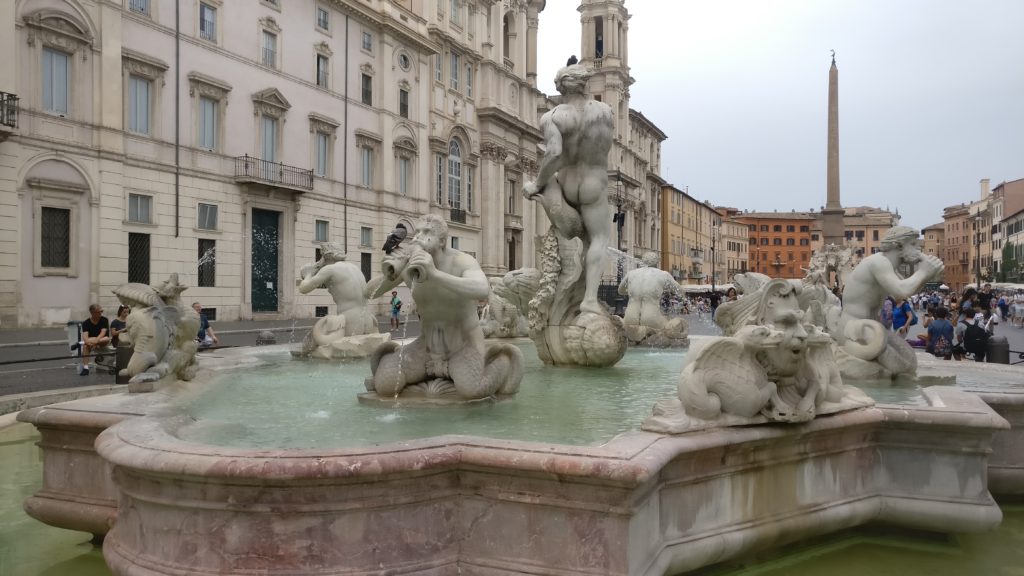 Another fountain in Rome, these things are everywhere!

Continuing our sightseeing tour we also saw the Trevvi Fountain and came across the Alter of the fatherland which was much bigger than we expected!  The alter was built as a tomb for the first king of Italy in the early 1900’s.

For lunch we decided to make our first stop of our impromptu pizza crawl at Rosciolis Pizza!  What an amazing pizza place!!!  We walked into the bakery and were greeted with a large spread of pizza choices alongside sweet treats. 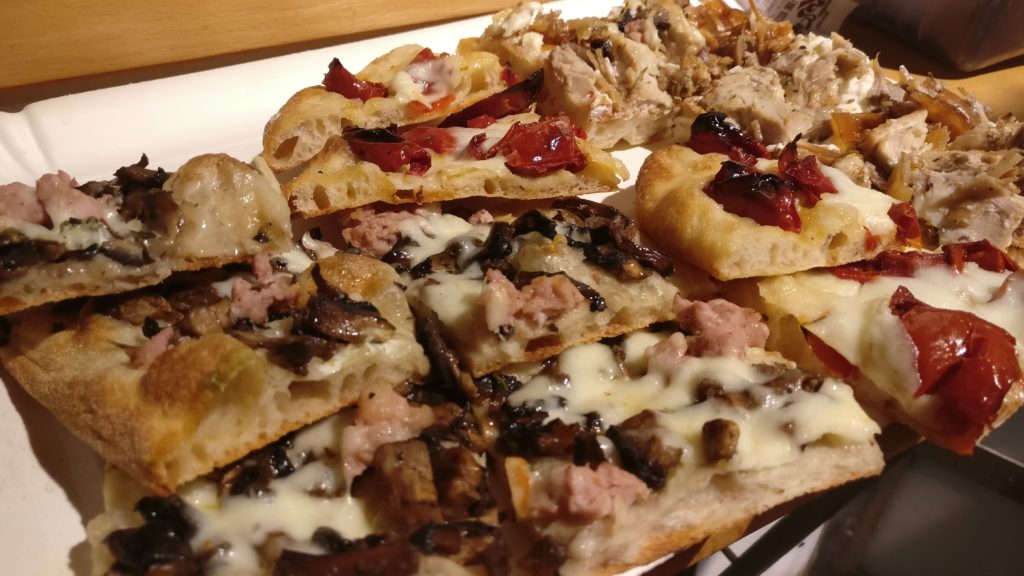 Roman Pizza is prepared in long narrow sheets and is cut to order depending on the size that you want.  You pay per weight so the size is up to you.  We got a selection of types and began to chow down.

Both of us were stuffed once we finished and used the rest of the day to burn it off.  I should also mention that we may have gone back later in the day for some sweet treats and a little more pizza, we couldn’t resist!  One of our favourite quotes from the trip was in reference to a slice of decadent Rosciolis pizza, “It’s like eating butter, really good butter”.  The aspect that I really enjoyed about Rosciolis was that they tended to used garlic oil instead of the traditional tomato sauce, something is very much prefer.  The crust was soft on the inside and crunchy on the outside and the toppings were fresh and amazing.  The service was quick and efficient.

The next day we continued our pizza crawl by using the commuter rail to visit the area near the Vatican.  After a short walk we arrived at Bonci.  This joint also came highly recommend and after a positive experience at Rosciolis our expectations were high.  We grabbed a ticket and began to wait, and wait, and wait for our number to be called. 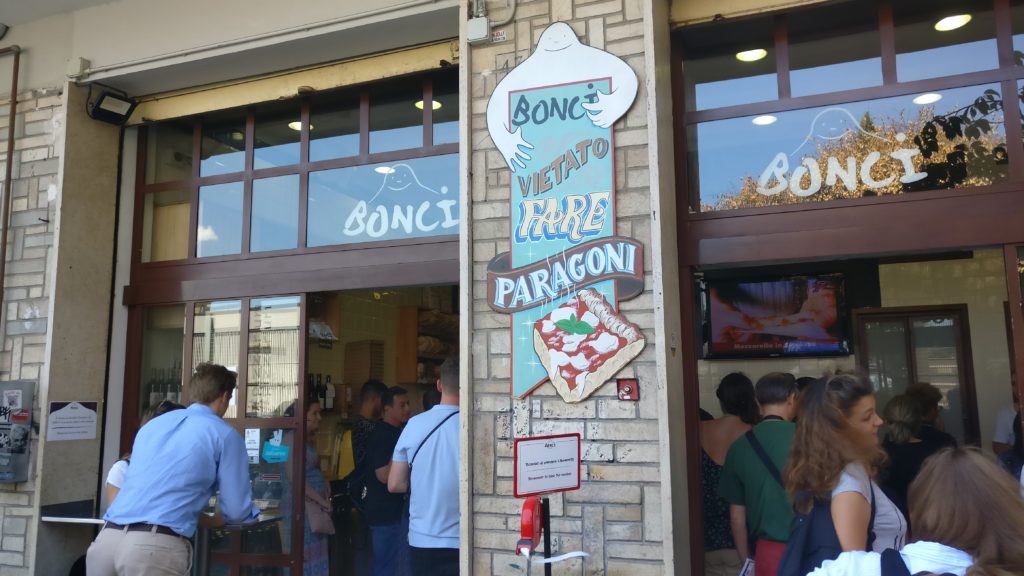 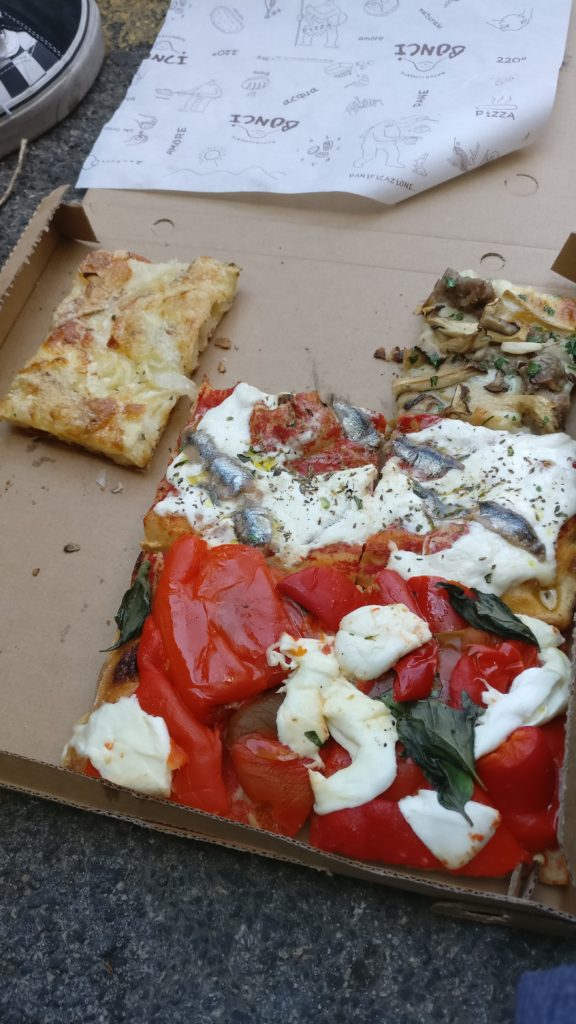 Eventually after about a 30min wait it was our turn and we made our selections, payed, and began to consume!  The pizza was also very good with fresh toppings and a nice crust.  One difference was that they reheat the pizza in the oven before they serve it to you.  We discussed the quality of the service at Bonci and decided that it was very lacking.  We waited almost an hour to get some pizza and it wasn’t even that busy.  The fact that they reheat the pizza I think delays the entire process drastically.  At Rosciolis the entire process took about 2 mins to order, pay, and receive your food.  At Bonci as I mentioned it took almost an hour to get pizza that was arguably not as good.  That being said we both agreed that we enjoyed Rosciolis more!  Later in the day we also visited the Vatican taking in the views of St. Peter’s basilica and St. Peters square. 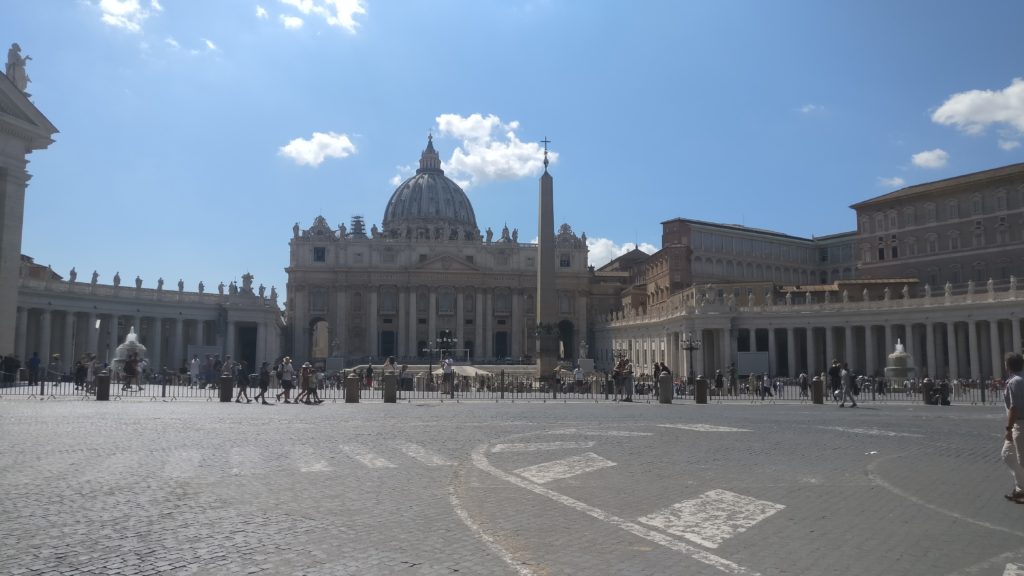 The Vatican and St. Peter’s square

The following day was our scheduled lunch at Rosciolis.  I should mention that Rosciolis has a deli/restaurant, a bakery, and a cafe all within walking distance.  The Rosciolis deli was highly recommended and reservations were required to get in.  It is said to be one of the best restaurants in Rome.  We started of our meal with one appetizer of mortadella with shaved Parmesan on top and another of goose foie gras with fresh crispy bread.  Both were amazing and the waiter recommended a red wine to accompany.  Our main pasta courses were a carbonara with crispy pork cheek on top and the classic Roman dish of Cacio e Pepe.  Both were absolutely amazing with perfect al dente pasta.  We also ordered a meatball dish which we shared because we were both already full.  Finally they brought us a little dessert of two cookies with melted chocolate for dipping.  This was one of the best meals of the trip and we both thoroughly enjoyed every aspect. 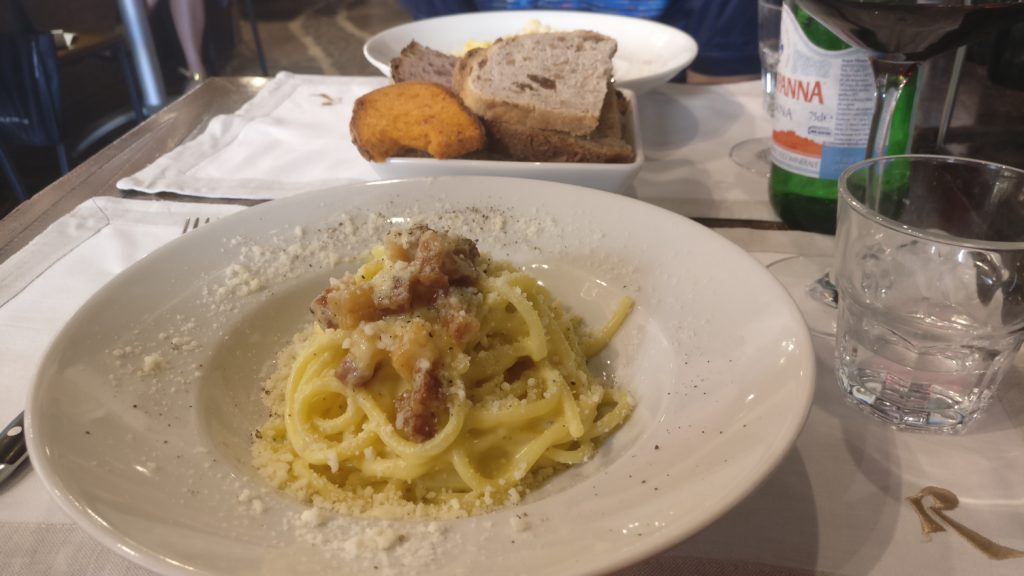 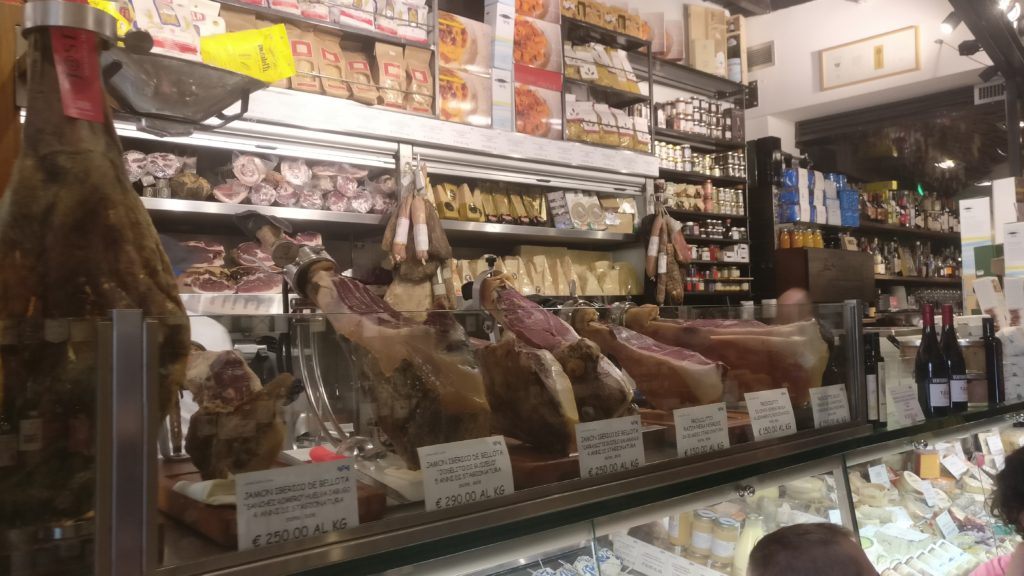 The arrangement of meats at Rosciolis

We sat in a nearby park to recover for a few mins and then made our way over to the colosseum and Roman forum to view some of the ancient sights. 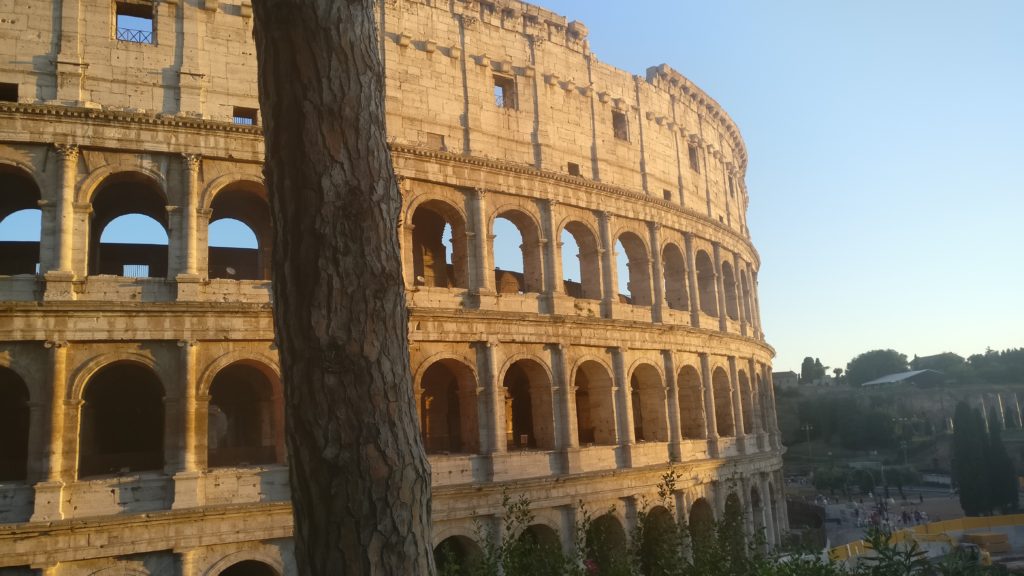 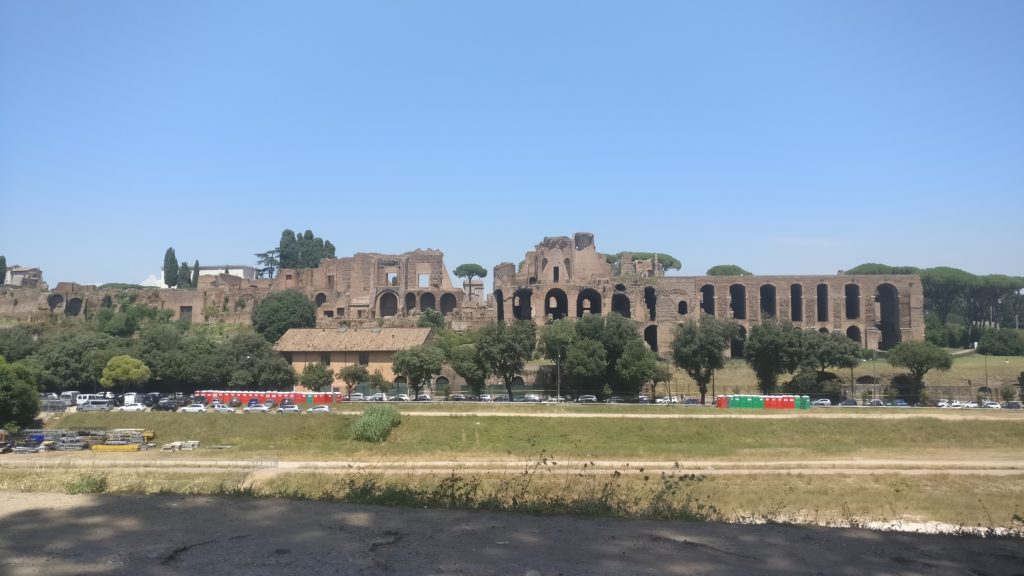 A piece of the Roman forum

For our last day in Rome I had the opportunity to enjoy another bowl of cacio e Pepe and a nice glass of wine and we relaxed and got ready for our flight the next day. 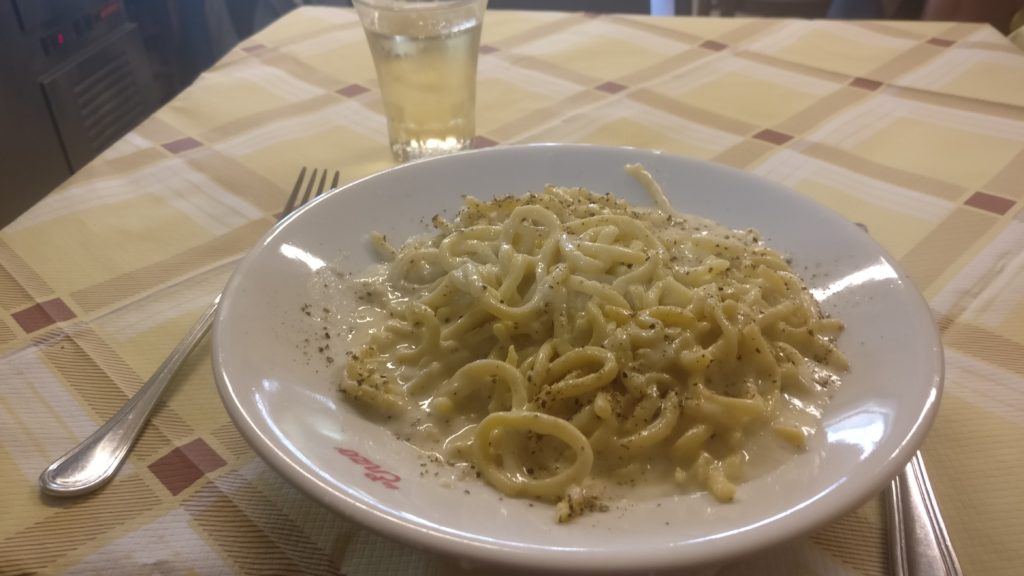 Oh, and we also had one last gelato which actually turned out to be the best gelato of the entire trip. 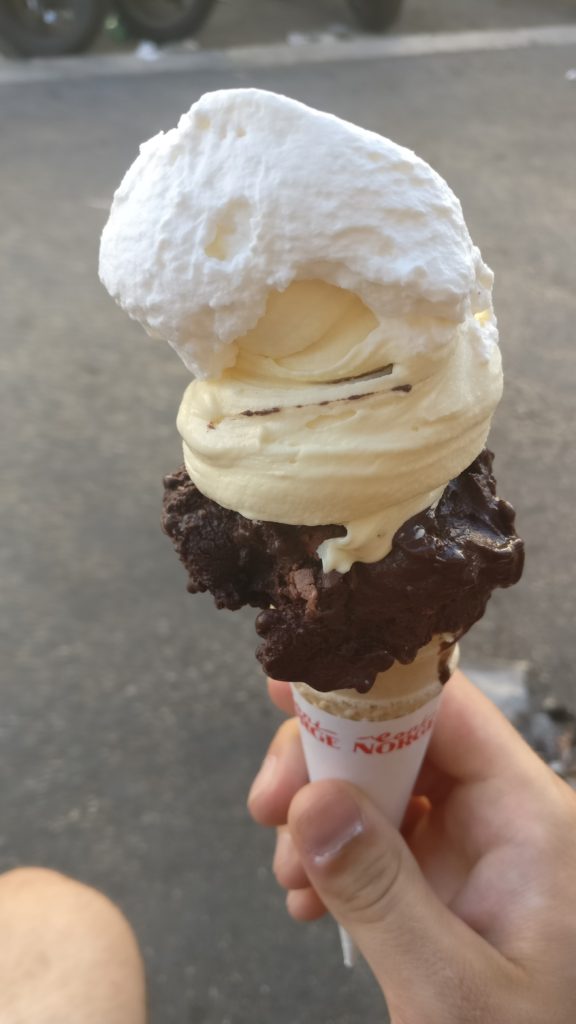 This concluded our trip and I hope you have enjoyed the entries.  Till next time…